Not quite sure what to expect, Year 8 awaited nervously for their Year 9 counterparts in the Rowley Hall; an arena more used to sporting contests but today, set up for a battle of brains.

Year 9 spilled into the Hall; eager to revisit their prep school and share their adventures of having stepped up to the heady heights of Framlingham College. Ten Year 13 students had volunteered to take a brief break from their A Level Maths studies to referee teams… a number remembered taking part in this event some years ago and it was a treat to see ex-pupils Joss Easey, Archie Goodhead, Seb Butler and Buster Blore ‘giving back’ their time.

The competition comprises four rounds: Maths Game Challenge, Cross-Number, Mini Relay and the Mayhem Relay. Ten teams of four pupils – two Year 8 and two Year 9 – simply aiming for the most points. The Maths Game Challenge was a new event this year – designed to throw our pupils together into a collaborative, creative task and put them on the spot to present a new maths game idea in a 60 second pitch. With just 30 minutes to prepare, innovation and attention to the brief were evident. If you spot games such as ‘Frog Spawn’ ‘Shape Shift’ ‘Mathonopoly’ or’ QuickFire’ on the shelves next Christmas you will know where the ideas originated. A hushed focus descended as the fiendishly tricky Cross-Number round commenced. A pair on the Down Clues and a pair per team on the Across. Heads were scratched, scrap paper was put to good use and gradually the grids were filled as the clock counted down. At this stage Teams 2, 10 and 5 were in the lead. Time for the Mini-Relay; another round where each team worked in pairs but were reliant on each other for the T-number to feed into their question – all to be done in 6 minutes for bonus marks and four attempts at the process. Team 7 leapt in delight as they completed a round in sub-3 minutes: I cannot remember a faster success. After a delicious lunch and plenty of sociable chatter, it was the moment we had all been waiting for, the grand finale; the Mayhem Relay. This high scoring round sends pairs of teammates dashing around the hall from referee to each other to solve as many mathematical problems as they can in the time allowed. A marvellous excuse for mayhem and maths! Once heart-rates had recovered and scores had been totalled by Mr Henriques, the results were in. Mr King, Head of Fram Prep, thanked all the staff ( Mrs Ward, Mr Means, Mr Henriques and Mrs Russell) for organising this event which showcases our values of striving for academic excellence, enjoying the journey of learning and working creatively and collaboratively.
Missing a prize by 1 point, Team 3 were ‘Highly Commended’ ( Seth Faulkner, Oscar Clay, Emma Williamson, Joe Lewis). With 177 points, Team 1 came third (Charlotte Alabaster, Ben King, Joe Graves, Callum Pearce,Tom Cullen). In second place were Team 6 scoring 179 points (Jonty Ward, Finlay Bloore, Jim KIng, Josh Slay). Victory – by just two points – with a total of 181 – went to Team 5 (Sam Pleasants, Connie Henriques, James Aldous and Tabby Walker). A closely fought competition and maths memories to inspire and enthuse our Framathematicians! 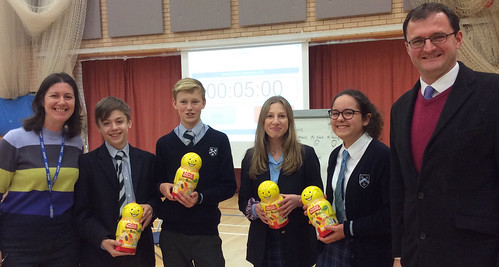