By: Martin Myers-Allen, Director of Development

The Republic of Botswana is one of the mostly sparsely populated country on earth and is place of singular and unparalleled natural beauty. The country is predominantly flat, tending towards gently rolling table land. 70% of its territory, 52,800 sq km, is covered the Kalahari Desert with the rich Okavango Delta is in the Northwest. It is blessed with some of the greatest wildlife spectacles on earth. In addition to mining and cattle it now boasts the highest GDP per capita in Africa because after independence in 1966 it ushered in an era of utterly exclusive safari experiences that cannot be matched.

Our team of 21 students, Mr Martin Myers-Allen and Dr Richard Higgins landed in South Africa on 8th July. Every member of the team had been given specific roles and responsibilities, on rotation, throughout the venture because the aim was for the youngsters to take actual ownership of the rich and varied experience that lay in wait.

We immediately visited the Ann Dyke Cheetah Sanctuary and, the next day, crossed the border to visit the Khama Rhino Sanctuary. From that point onwards we were on safari, in the wilderness, driving through fossil river valleys and swaying golden grasses to discover black-maned lions, cheetah, oryx, springbok, steenbok and kudu. Then to the 5000 sq km Moremi Game Reserve which covers one-third in the Okavango Delta which started with a river safari in dugouts to see hippopotamus, elephant and giraffe in the flood plains and lagoons.

We were back in vehicles seeing lions, buffaloes, red lechwe and elephants in Mopane woodland, thorn scrub and dry Savannah, riparian woodland and grassland. We also found time form our busy schedule to engage in community projects visiting schools; teaching in the classroom; learning from each other’s cultures and providing funds for school improvements.

We also paid a visit to Elephants Without Borders and saw at first-hand what plans they had to cope with the 126,000 elephants that roamed the land placing them at ever increasing conflict with farmers. We promised them a $500 donation and know it will be used wisely. Towards the end of the trip we headed for the border town of Kasane we entered the 11,000 sq km Chobe National Park. This is the epicentre of Botswana safari industry famed for its massive elephants and enormous elephant population in Savuti, Chobe Riverfront and the Linyanti Marshes.

We saw warthog, zebra, blue widerbeast, waterbuck, impala, tsessbe, giraffe, leopards, lions, spotted hyena, baboons, vervet monkeys, jackals, caracal, vultures and honey badgers. We had seen the Big Five and every animal represented on ‘The Lion King’. We had survived 15 days in the bush where our nights were disturbed by the sounds of hyena, honey badger and antelope roaming around our tents. The eerie roar of lions and crashing of elephants punctuate the moments of silence.

From Kasane we crossed into Zambia and getting across the border took 4 hours – a bureaucratic nightmare. However it was worth it to stay in Livingstone and experience the thunderous Victoria Falls, ‘the Smoke that Thunders’, that borders Botswana, Zimbabwe and Zambia. At 1,708m long and 108m deep the entire volume of Zambese River cascades into the gorge at 12,800m 3/second sending up clouds of mist and rainbows. The journey across Zambia to Losaka and home took 37 hours which gave the expeditioners ample time to reflect on an exhilarating journey of a lifetime. 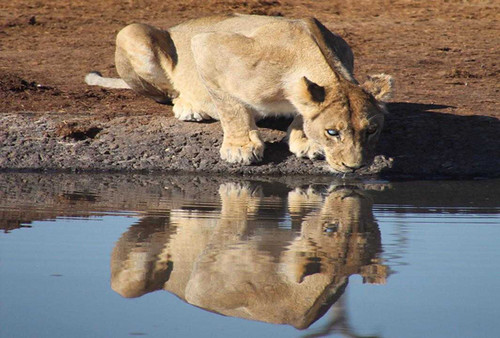