The U11 Girls headed to Redbridge Sports Centre on Wednesday 14th November to compete in the England Hockey in2hockey East Finals.

The girls faced Stephen Perse (Cambs) first up, and were a little slow to start, but managed to break down their opponents and open their campaign with a 1-0 win and three points. They then beat Sutton Valence (Kent) 2-0 in their next game to set up a deciding game versus St Faiths (Cambs) to decide who would top the group. In an end to end game, where both teams had opportunities to score, neither team could find a way through, and finished in a 0-0 draw. This meant Fram finished top of their pool.

After the lunch break, the girls faced a crossover game to work out whether they would play for 1st-4th or 5th-8th versus St Cedds (Essex). In a physical encounter, Fram took the lead, but conceded a late penalty corner meaning the winner would be decided through a shootout. Some heroics from Etty Hayward in goal meant we would progress and have a chance to win the tournament.

Familiar opponents in St Faiths were first up, and a repeat of the earlier encounter occurred, with both teams having balls cleared off the line, but neither could break through again. Kings College (Cambs) followed, and Fram had chances in the first half, but failed to convert and resulted in another 0-0 draw. The girls’ final game was against Bedford Girls (Bedford) and desite going behind, the girls clawed back in the game to finish with a 1-1 draw.

This meant that Fram finished 3rd in this pool and subsequently 3rd in the East Region, conceding just two goals all tournament and remaining unbeaten throughout. Plenty of positives ahead of the U11 IAPS National Finals next week at Rugby School. 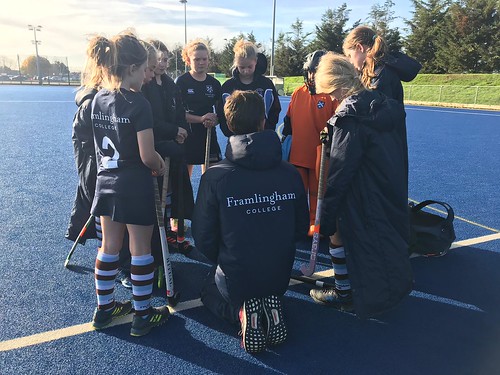