The RAF Year 10 Cadets spent the Field Day weekend based at RAF Henlow in Bedfordshire, hosted by our RAF liaison Sergeant, Sgt Seed. A more beautiful two days weather wise it would be hard to imagine and this enabled most activities to take place outdoors. On Sunday the cadets tackled leadership tasks, including problem solving, construction and selling their ideas, followed by archery and then simulator flying in a very realistic “fake” cockpit with three huge screens. This was very much enjoyed and showcased the cadets with the most promise. We also had a look around the aircraft collection on the airfield, which includes Prince Charles’ personal Chipmunk and a WW1 era Avro 504. Many vintage aircrafts had been flying around all day; Henlow is particularly unusual because the taxiway out to the runways from the hangars goes across the fairway for the first hole of the Henlow golf course – potentially hazardous for both golfers and pilots! Sunday concluded with pizza and then settling into the cadet accommodation block.

Monday dawned fair and, after an early formal breakfast in the Sergeants’ Mess, we headed off to the nearby Shuttleworth Collection, which, as our excellent tour guide was quick to tell us, is not a museum, because every aircraft you see there can, and does, fly (except for the “Flying Flea” which is banned from flying due to its inherently dangerous flying characteristics! It includes the oldest flying aircraft in the world – a Bleriot monoplane of 1909. The tour there is excellent and it takes you behind the ropes amongst the aircraft and picks out highlights from the collection. We discovered that Bela Reader’s Great, Great Uncle was the first man to drop a bomb on the famous Dambusters Raid in 1943 and explored the Lysander aircraft that flew spies and agents into France at night during WWII and which has a link to Framlingham’s most famous former pupil (RAF-wise), Gp Capt “Percy” Pickard, who led the famous Amiens raid (also of 1943) and who had flown Lysanders for most of the war before swapping to Mosquitos.

Sqn Ldr Skitch also told us about his grandfather flying Sopwith Camels during WW1, when Mr Skitch was just a lad…! 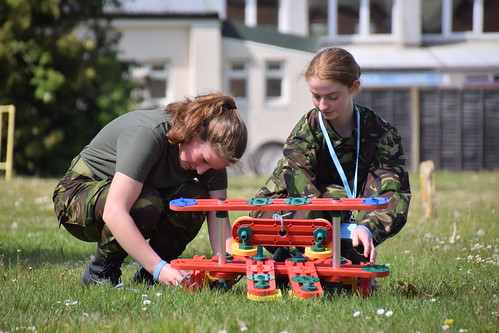