Lucy Darrington’s new play Look Left (staged in the intimacy of the Drama Studio with audiences on four sides on Friday the 26th January) was a terrific theatrical experience enjoyed by around 80 students, ex-students, parents and staff.

We were treated to extracts from the play which was also directed by Lucy (Year 13).

The play is set in a dystopian future society where mental belief is believed to be an illness that is highly contagious so all people displaying mental instability are locked up in dilapidated houses. Society’s brutal scheme to rid itself of the scourge of mental illness is foiled by the way the inmates come together in revolt.

Lucy wrote the play and cast it from a core group of committed talent and production support. There were powerful performances from all the cast: Lucy Darrington, Coral Langridge, Ella Hamilton-Wright, Conal Judge, Rupert Dean, Aine Craig, Philip Lewellen, Holly Van-Assen with the production supported by Ellie Mayall on lighting and sound.

A retiring collection on the door raised £250 for MIND, a charity close to Lucy’s heart who herself has suffered from anxiety and says that she wrote the play as part of a process towards overcoming her own challenges. 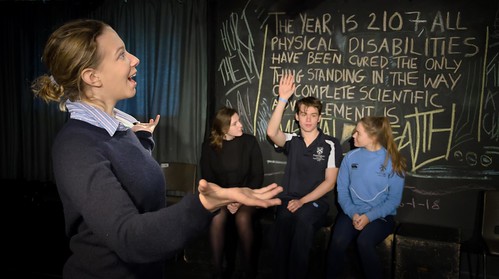