On the (very early) morning of 12th June, the entire bleary eyed Year 9 cohort embarked on a visit to the Ypres salient in Belgium.

On arrival at Langemark cemetery we met our two local and extremely knowledgeable guides. Further exploration of the cemetery revealed a mass grave containing the remains of 26,000 German soldiers who had been reinterned after removal from sites across Belgium. We heard the heart-breaking story of the young students who, along with their teachers had enthusiastically signed up at the beginning of the war to fight for the ‘Fatherland’ and were cut down in their thousands on the 23rd October 1914. For this reason the cemetery is often known as the Studentenfriedhof – Students Cemetery.

The next trip was to Tyne Cot where pupils were struck by the contrast between British and Commonwealth graves to those we saw at Langemark. Pupils heard that in addition to the 11,954 graves at Tyne Cot, there are almost 35,000 names on the Tyne Cot Memorial to the missing. This memorial was only built because there was not enough room on the Menin Gate, visited later, which already contained 55,000 names of the missing.

We also visited the superb Passchendaele Museum at Zonnebeke which houses a fascinating collection of wartime artefacts and has an elaborate system of recreated trenches, underground bunkers and blockhouses.

The day culminated in a collective tribute and wreath laying at Lijssenhoek cemetery where we remembered all of the dead of WWI including the 144 OF’s and 4 masters from Framlingham College.

Click on the photo below to view more photos from the trip. 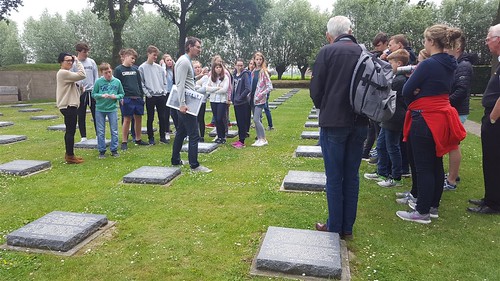