A special Chapel service was held at Framlingham College on the morning of Monday 17th June to commemorate the extraordinary and courageous acts of Old Framlinghamian Lieutenant Augustus Agar RN VC DSO. Exactly 100 years ago to that day, 17th June 1919, Agar was responsible for sinking the Russian Cruiser, The Oleg, during the Russian Civil War with a single Coastal Motor Boat (CMB). Lieutenant Agar was awarded the VC in August 1919 for this brave act carried out in extremely challenging conditions.

Framlingham College has always been extremely proud of its heritage and the school community is forever grateful to those past students who gave their lives in the ultimate sacrifice for their Country. The school is honoured to have three Victoria Crosses awarded to past students; Hewitt, Flowerdew and Agar.

BBC Radio Suffolk featured the Commemoration in two separate shows that day, which can be found here:

(Please note that BBC content is only available for 30 days after broadcast and the above links will expire on Wednesday 17th July 2019. You will need a BBC ID account to listen to this content.)

It was a pleasure to welcome Agar’s family to the service and in particular to welcome his Great Nephew, Jonathan Agar, who addressed the school, recounting Agar’s most significant accomplishments in his naval career and painting a picture of the extraordinary man himself:

It is a great honour to be here today on the anniversary of the sinking of the Russian Cruiser The Oleg by Lieutenant Augustus Agar – Gus as he is affectionately known, my great uncle, exactly 100 years ago today. We are commemorating a little known action by the Navy’s Costal Motor Boats – CMBs – vessels just over 40 or 55 feet long that carried one or two torpedoes mounted between two fuel tanks and the men who served in them were known as the “Suicide Club”!

On 17th June 1919 the Russian Bolshevik cruiser the Oleg was bombarding the White Russian town of Kronstadt, located at the head of the Gulf of Finland marking a strategically significant point. In an audacious attack the Oleg was sunk by a single CMB under the command of Gus who was awarded the Victoria Cross for this brave action.

His citation published in the London Gazette in August 1919 reads:  “In recognition of his conspicuous gallantry, coolness and skill under extremely difficult conditions whilst in action.”

One-hundred years on, it is almost impossible to imagine the pressures and dangers that were overcome to execute such an attack combined with the sheer professional skills and nerve required to carry it out. In an era long before GPS, Satnav and Gore-Tex the sheer courage and determination shown is truly humbling.

As Sir Paul Dukes, an MI6 agent on shore in Krondstadt noted at the time: “The extreme bravery of this act will be appreciated when it is remembered that Agar with his motor-boat was alone amid the entire Red Fleet.”

Others took note too. When presenting Gus with his Victoria Cross at a private audience at Buckingham Palace, King George V concluded that he would like him to serve on the Royal Yacht, which he duly did 5 years later.

Time is short today so I will briefly try to convey some of Gus’s life, his most significant accomplishments and give you a sense of the man himself.

His life began inauspiciously when he was born in Ceylon in 1890 as child number 13 – most definitely the runt of the litter.

His mother died very shortly after his birth and a few years later his father succumbed to cholera in China. Gus was sent to England with his nearest brother, my grandfather, here to Framlingham College where they enjoyed 5 formative years.

By 1903 Gus was off to Dartmouth and then to the Royal Navy 2 years later, at the age of 15, for a career that spanned 40 years of service. On the outbreak of the First World War he was quickly into the thick of the action, learnt to fly in the formative days of the Royal Naval Air Service and served under Admiral Jellicoe at Jutland in 1916.

His leadership skills caught the eye and in early 1918 he was summoned to the Secret Intelligence Service (now MI6) and assigned to a Top Secret appointment to command a new squadron of fast Coastal Motor Boats (CMBs), running spying missions in the Baltic to counter increased aggression from the Russian Bolshevik fleet in this strategically significant region.

The raid on Krondstadt took place 100 years ago today and a further operation followed with a larger fleet of CMBs 3 months later for which he was awarded the Distinguished Service Order (DSO), and two others received VCs for their enormous courage during the operation.
His career blossomed between the wars as a life of ‘Showing the Flag’ around the Empire kept him as sea for much the time.

The onset of the Second World War saw him once again in the thick of the action, initially in the North Atlantic escorting vital supplies including gold bullion from Canada and the US to fund the war effort and countering the ever-present threat of German U-boats.

By 1942 he was commanding HMS Dorsetshire in the Indian Ocean when in April, south of Ceylon, the ship was attacked by Japanese aircraft and sank in just 8 minutes. In spite of the speed of the ship’s demise, Gus was the last man off and organised the men in the where they gathered together in shark-infested waters for over 24 hours while awaiting rescue. 500 men, some badly wounded, covered in fuel oil with treading water their only hope.

When salvation duly came in the form of the British cruiser HMS Enterprise and her escort destroyers Paladin and Panther half an hour before darkness, only 16 men were lost from the ship’s company – a testimony to Gus’ leadership and the morale of the men he commanded. For this he was Mentioned in Dispatches.

Suffering from the effects of swallowing fuel oil and a septic shrapnel wound Gus’s days at sea were over and his last appointment was as President of the Royal Naval College, Greenwich which concluded in 1946.

So, a remarkable story of an extraordinary man.

He escaped death and capture on numerous occasions and some of his exploits are the stuff of a real life thriller – almost impossible to write – an early James Bond figure to some.

He believed in the laws of natural justice, fair play, not giving way to dictators, freedom to live in safety and in the natural order of things.

His philosophy and approach to life was all the more remarkable as he never knew his mother and his father died when he was still young.

Instead, his formative years were spent here at Framlingham College where he learnt resilience and independence and the virtues of “sticking to it” and “doing the best you can.”

The Navy became his family and he served a 40 year career of devotion to all around him, showing daring, innovation and outstanding leadership.

As we commemorate Gus’ action 100 years ago today when he sank The Oleg, it’s only fitting that it started here, in this chapel, on these playing fields and in your classrooms. In remembering his actions and career, we can also look forward with great purpose and determination knowing that anything is possible for anyone – even the runt of the litter! 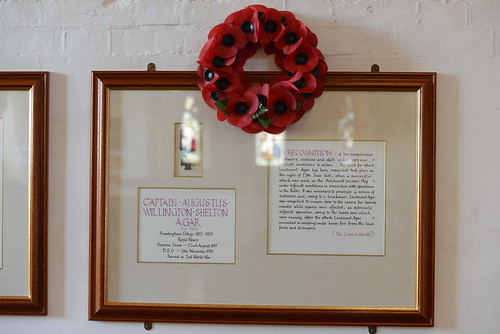